View all our available packages, including Fully Inclusive options as well as Special Offers 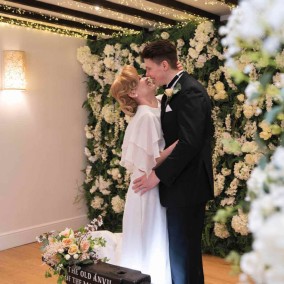 Join in the tradition and elope to the Famous Blacksmiths Shop, Scotland’s Original Home of Romance, with a romantic wedding ceremony and a photography package of 14 photographs to cherish your special day forever. 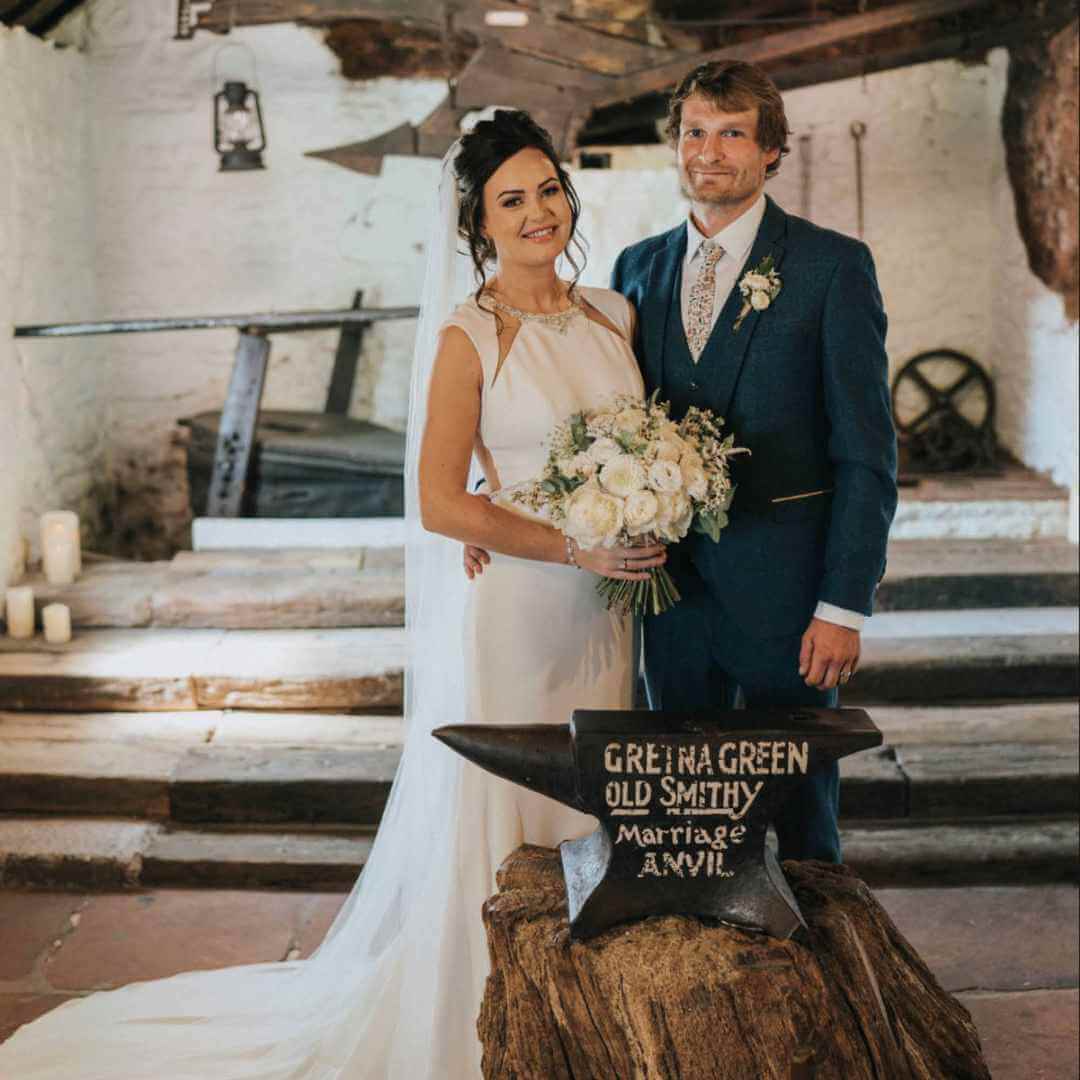 Marry in Gretna Green with photography, 2 nights accommodation and a bottle of sparkling wine in your room on arrival. Or why not choose to upgrade your package to include dining for 2? 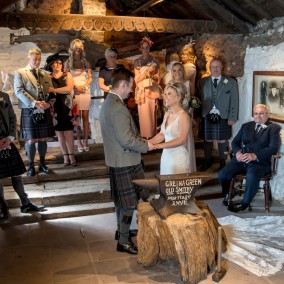 Marry in the Famous Blacksmiths Shop Original Marriage Room or Gretna Hall Hotel, and enjoy canapes on arrival, a welcome drink of Bucks Fizz, and a photography package of your special day with 16 (10×8) photographs presented in a traditional album. After your ceremony, celebrate your new marriage with a 3-course meal for you and your guests – wine included! Then, spend two nights in a Double Room with a bottle of sparkling wine. 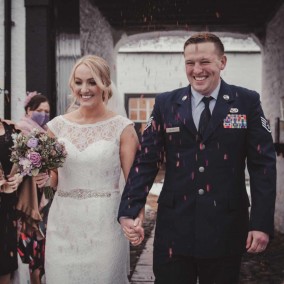 As well as a photography package of 16 (10×8) photos, complimentary wine and a 3-course meal for you and your guests, the ‘Blacksmiths’ 20 Guest Package also includes private function room hire, an evening snack, two night’s accommodation for the bridal couple, breakfast in bed the morning after your wedding and much more. 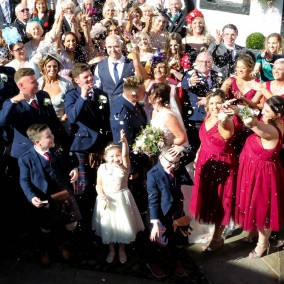 Sit back and relax knowing your wedding day has been completely taken care of by our award-winning wedding team. The ‘Love Story’ Package combines all the best features of our exclusive packages, as well as an additional cocktail buffet, evening disco, two night’s accommodation for the bridal couple in one of our luxury suites and much more.

Gretna Hall is licensed to hold civil and religious ceremonies suitable for wedding parties from 2 to 80 guests.To book your ceremony, follow the steps below:

Telephone our dedicated wedding team on 01461 336001 to book your preferred date and time in your chosen ceremony room: 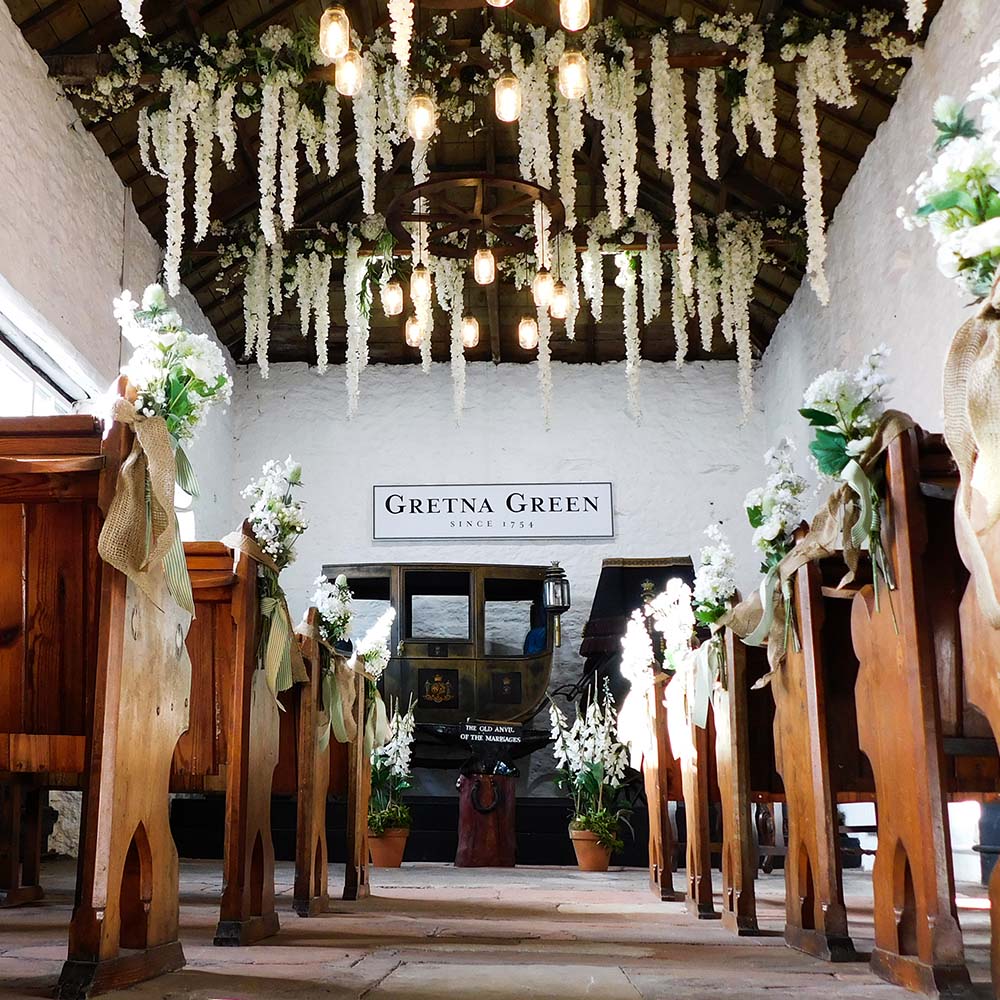 The Coach House, with its rustic, ancient flagstone floor and whitewashed walls, that conjure up images of horse-drawn carriages arriving in days-gone-by, is a beautiful, enchanting room to marry in. Today it houses a magnificent 19th-century carriage, which makes a stunning background for photography and has recently been refurbished to include reclaimed church pews; for additional seating. 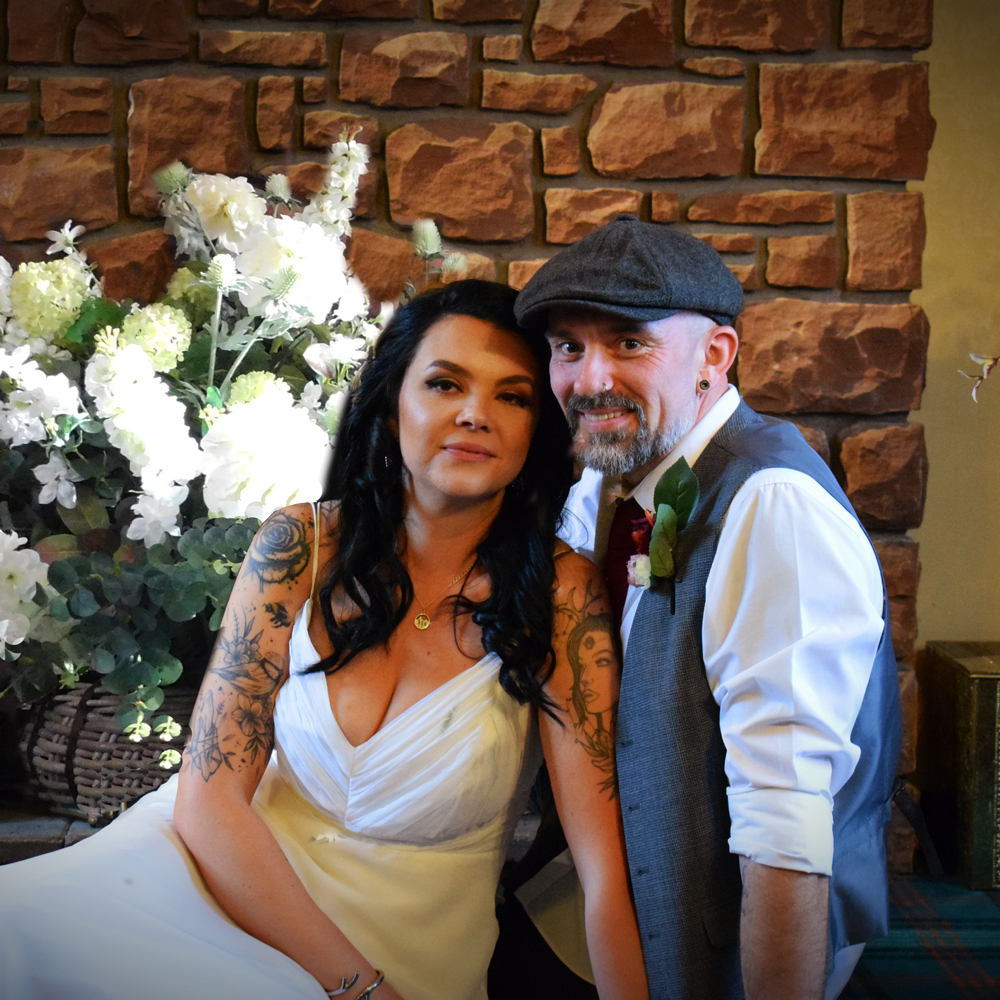 The Cottage at Gretna Hall is the perfect venue for a cosy, intimate wedding. Candle-lit, with its open fire, it’s perfect for those couples looking for somewhere small and unique to marry. 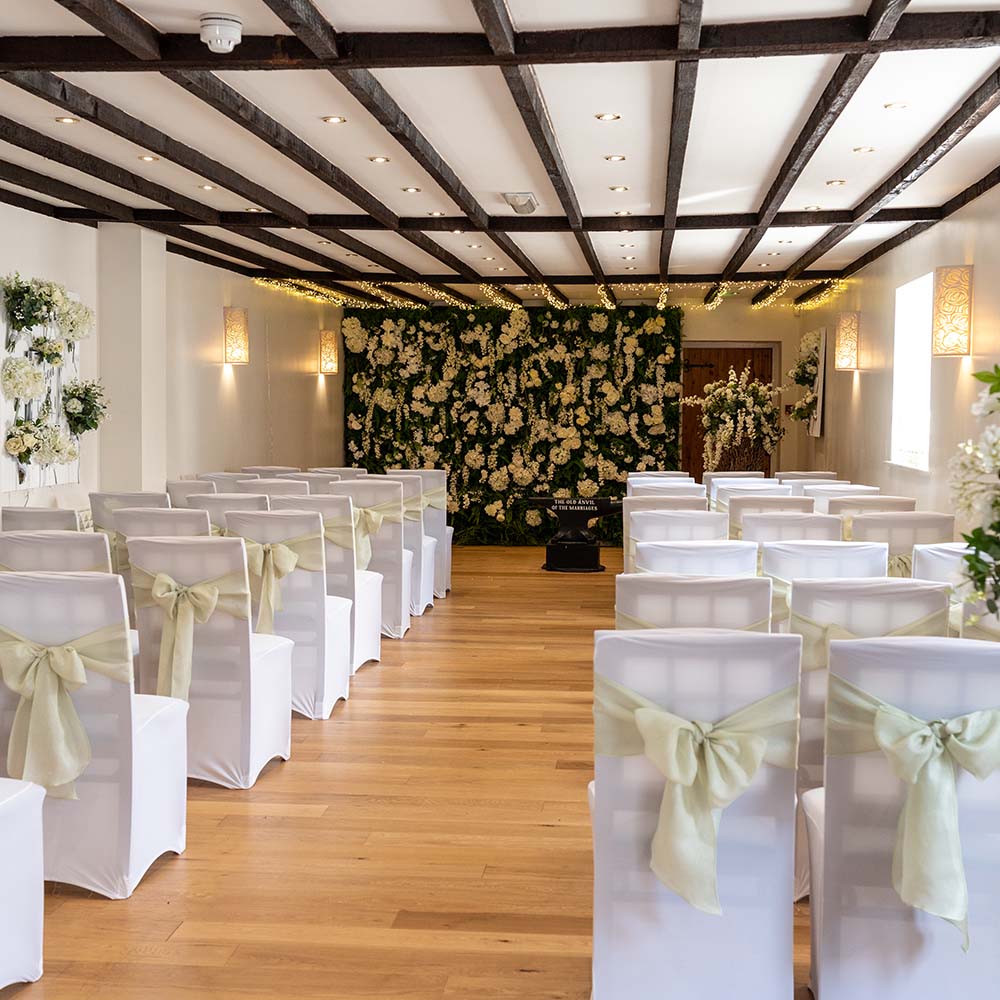 The Courtyard Room, is an elegant Gretna Hall wedding venue, where you walk down the aisle, guests with seated either side. Take to the red carpet, while your treasured guests line the path to your one true love and the famous anvil and hammer; where together you will forge your love for eternity.

Step 2a: Marriage by a Minister

If you wish to be married by a Minister please contact one of the ministers on the list opposite to confirm their availability. Fees are payable directly to the Minister.

A: Call our Wedding Planners on 01461 336001 to confirm your date and preferred venue with the required payment.

B: Marriage Notice Form (M10)
This is a legal requirement to complete M10 forms. These can be downloaded direct from www.gretnaonline.net. Once completed please send to Gretna Registration Office no more the 3 months prior to your ceremony. You must return all correctly completed forms, along with your original birth certificates and all other relevant documents, plus the registration fee of £70.00, at least 29 days prior to the date of your wedding (more if you have been married before). The following information in Section A should be completed on your M10 forms: Section A: Place of marriage Gretna Hall

C: Collecting your marriage schedule from the registration office
The marriage schedule, made up from the information you have given on the M10 forms, may only be collected by the bride or groom in person on the morning of the wedding or up to one week beforehand. Gretna Registration office is closed on Sunday and Mondays and may also be closed some bank holidays. This document must be handed to your minister before he or she can perform your marriage ceremony. Please do not complete any details on the marriage scheduled before the wedding ceremony. After you have been married you must return your signed married schedule to Gretna Registration Office within three days.

You can find a list of our Minister’s and Registrars within our Brochure.

Step 2b: Marriage by a Civil Marriage Celebrant

If you wish to be married by a Registrar please indicate this to our Wedding Planner and we shall make the necessary arrangements.

A: Once your wedding planner receives the booking payment and your instruction indicating your wish to be married by a Civil Marriage Celebrant they will then apply on your behalf. Once we have received confirmation a copy will be sent to you with full instructions of how to proceed.

B: Marriage Notice Form (M10)
This is a legal requirement to complete M10 forms. These can be downloaded direct from www.gretnaonline.net. Once completed please send to Gretna Registration Office no more than 3 months prior to your ceremony. You must return all correctly completed forms, along with your original birth certificates and all other relevant documents, plus the registration fee of £355 (Monday – Friday); £485 (Saturday); £551 (Sunday and public holidays), at least 29 days prior to the date of your wedding (more if you have been married before). The following information in Section A should be completed on your M10 forms:

There is no requirement to collect your marriage schedule as your Civil Marriage Celebrant bring this with them and returns this on your behalf.

There are times in everyone’s marriage when they feel like having a special celebration: Maybe it is a special anniversary, maybe it’s because there have been difficult times or maybe it’s simply because you would like to share your happiness and commitment with your family, friends and your own children. Ceremony performed by a blacksmith
The Gretna Green anvil wedding ceremony has been handed down through the years to make it not only a renewal of vows but also a celebration of mutual happiness. The Anvil wedding is, of course, unique to Gretna Green. The words spoken at the anvil are not spoken anywhere else in the world. The ‘Blacksmith’ will be one of our experienced staff who will conduct this moving ceremony. A signed certificate is given as a memento of the occasion. At the last count this experience has been a source of joy for husbands and wives from over 90 different countries.

Ceremony performed by a minister
Alternatively you can have a religious ceremony conducted by a minister. The minister would speak with you on the phone and together you could decide what sort of ceremony would best reflect your beliefs and the occasion. These can be traditional or modern, longer or shorter – there are different ceremonies to choose from. A donation to your minister would be in addition to the charge for hiring the room and you should contact one of the ministers who come here regularly for availability (see ‘Ceremony Only’ section for our list of ministers). Alternatively, we would welcome your own minister should you prefer.

If you would like to check availability or discuss a ceremony with one of our experienced staff, please phone 01461 336001

Gretna Green is a small village on the Scottish border that is world-famous as a romantic wedding destination. The first village over the border, it became a haven for young lovers following the 1754 Marriage Act introduced in England and Wales. You were forbidden to marry without your parents’ permission if you were under 21. So the young and in love began eloping to Scotland, where the law did not apply.

Gretna Hall was built in 1710 as a manor house for Gretna Estate and later became a coaching inn in 1825, the first official stop in Scotland for travelling stagecoaches and private carriages. The Hall is one of two historic marriage venues in Gretna Green frequented by run-aways desperate to marry, but forbidden to do so back home. Gretna Hall witnessed many romantic elopements as a venue for aristocratic weddings.

Gretna Green is synonymous with Anvil Weddings and it is the other historic marriage venue, the Famous Blacksmiths Shop, where the tradition of an Anvil Wedding began. Legend has it that if you touch the famous Gretna Green Anvil it brings you good fortune in affairs of the heart. It was here that the blacksmith would repair and make tools for the farms and shoe the horses. From 1754 the blacksmith in Gretna Green became notorious for a different kind of forging: joining couples in marriage.

It’s not every day that you get to say “I do” so choosing a memorable location to pledge your love is crucial. Both historic venues are available to you for your Gretna Green wedding. No other venues in the area can give you Gretna Green on your wedding certificate so follow in the footsteps of the romantic young couples and become part of living history. Our family of venues can make your dreams come true.